I am in the unfortunate position of having to watch F1 on Spanish television. I say 'unfortunate' as F1 is new to Spain and Spanish TV and therefore they still have a lot to learn. (There is no F1 here, only Fernando Alonso)
I'm talking about the commentators on Tele Cinco. Just before the Canadian Grand Prix last week they each gave their predictons for the outcome of the impending race.
Above: In wining form - Hamilton
They each gave variations of the top 3 winners as Fernando Alonso (all said first - we can forgive national pride) followed by either Felipe Massa, Kimi Raikkonen or Nick Heidfeld. Now I was somewhat surprised (and a little humoured - I have been living in Spain for 4 years now) to hear that not one of these so-called professionals felt that Lewis Hamilton was worth mentioning in the top three. This despite the fact that he had finished in the top 3 in EVERY race of his short F1 career; that for the 3 previous races he was actually faster than Alonso; and that he 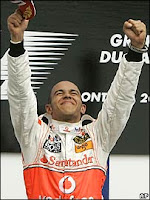 was on pole position for this race. Obviously not worth consideration. Of course he won the race and the Spaniard made loads of mistakes and failed to make the podium.

Following his history making win he praised his team, McLaren Mercedes and Alonso criticised them, saying that they favoured Hamilton as he was an Englishman in an English team.

And so to Indianapolis the following week and guess what happened?

Right: Another mistake by Alonso costs him dearly

You guessed it, Hamilton was again foolishly omitted from the predictions of all of the commentators and Alonso placed first. My wife even predicted it correctly - Hamilton, Alonso and Massa. And Tele Cinco were all proved wrong yet again despite Alonso having a faster pit-lane turn around than Hamilton and being able to catch him on the straight ie Alonso's car is faster and his team were faster with him than with Hamilton. Hamilton yet again made no mistakes (Alonso did) and came first again.

I am leaving Spain for a couple of months now and there will be 5 GPs before I return here. I believe and truly hope that Hamilton will continue his faultless wins and increase his championship lead over Fernando Alonso from t

Left: Fernando drinks sour-grapes as the next world champion looks on

Oh, and I can't wait to hear the Spanish commentators in September for the Monza GP. Will they even acknowledge Hamilton and suggest he might just scrape into the top three by then?

Translate this into Spanish - Sour grapes.
Posted by Diem Burden | Author 2 comments: Links to this post