Is your book cover speaking your language?

When I first entered the epub world as an author, I did so on a shoe-string. In fact, I'd promised myself not to spend anything on my book until I began making money. So I did the book-cover myself and it was - on the whole - well received. I had no training in book-cover design, nor the programs needed to knock one up. But after a month of trial and error and $12 (for the photo), I came up with this:

I liked it - it was, OK. I sold about 6 books per month. After six months of this I decided to give the book away. The downloads increased significantly - 7 copies per day for four months, on average. And then I decided to go pro.

The real reason for finding an expert to do the cover was book two. I didn't have the patience to knock up the second cover, nor the skills to bring the pattern of book one across onto book two. The one thing I was worried about was the cost - as the first in the series this book was always going to be free.

I found Jan Marshall on Twitter, and found her to be helpful and flexible regarding payments. We agreed to use the original background, and before long she sent me a file containing several possibilities. After discussing our options she sent me another file containing amendments. The result was this:

I uploaded the new cover in the final week of May 2013. Downloads increased immediately, averaging 20 per day (more than double the original quantity). Then on Sunday 9th May, something crazy happened. Over 220 downloads occurred. This continued into Monday, resulting in 600 downloads in the first 10 days of May (more than the preceding 3 months added together.)

I have possibly tracked this sudden surge to a website that promoted my book that day. It listed '5 good ebooks for free'. It has a following of over 100,000. I'm not sure the surge can be traced back to this posting but I have no other ideas at the moment. Whatever the reason for the surge in downloads, I am sure it is down to the new-look cover. With a doubling in downloads, I'm sure this cover has been picked up and promoted, which wouldn't have happened with the original, amateur version.

With book two close to release, I can now sit back and get on with the writing whilst Jan focuses on designing the new cover, which I'm sure will look as good as the first one. In the meantime, here are the two covers side by side. Can you spot the amateur? Is yours easily identifiable as an amateur, or can it hold its own up there with the professionals? What do you think? I'd love to hear from you. 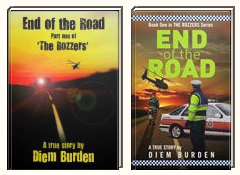 Posted by Diem Burden | Author No comments: Links to this post